As we have already expressed in other forums, Singular Studio is an architectural firm committed to the environment, and thus contributes to sustainable development of our society not only from our systems and ways of working following the ISO 9001 and ISO 14000 regulations, but also carrying out projects that anticipate the 2010/31/UE Directive of the European Parliament on the Energy Performance of Buildings. In this sense, the project for a "Bioclimatic House in Villena" that we have just finished is framed in the context of buildings with "Zero Emissions", anticipating nearly 10 years to the relevant regulations.

The project has been designed by the architects José Moragues Puga, Juan Manuel Sanchez Gutierrez, Alberto Zubieta Escalada and Javier Boix Camacho aiming to define a bioclimatic detached house in Villena (Alicante - Spain) through the use of parameters such as renewable energy, energy efficiency, optimization of natural resources, use of local climate, reduction of environmental impact, etc.., so it means that the home is calculated not only to generate the energy that it uses, but also to reuse the waste generated, closing the loop and getting a zero energy balance to the defendant and produced, being a clear paradigm of sustainable architecture. The site is located at the coordinates 38.67 ° N and 0.87 º W, to 527 meters above sea level. With orientation north - south, the area falls within the areas of the intermountain corridors or hallways prebetic which situations and settings are considered a high plateau with traces of transition between the landscape of La Mancha and the Levante, so the data obtained in all studies classify the area as Continental Mediterranean climate with more cold months than warm, and with a lot of thermal amplitude between winter and summer because of its relative proximity to the sea (50 km). 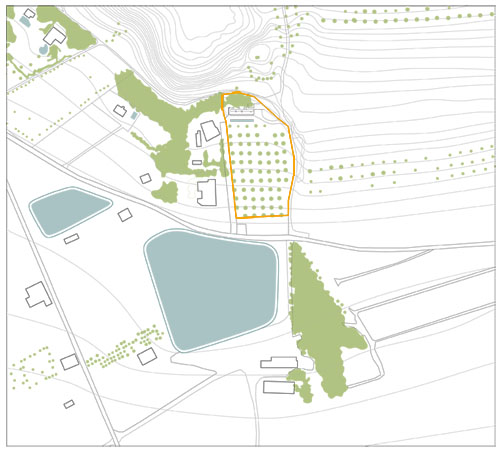 The implementation of the house in the ground is developed to minimize the impact, without having to move the existing trees and not obstructing the natural flow water field. 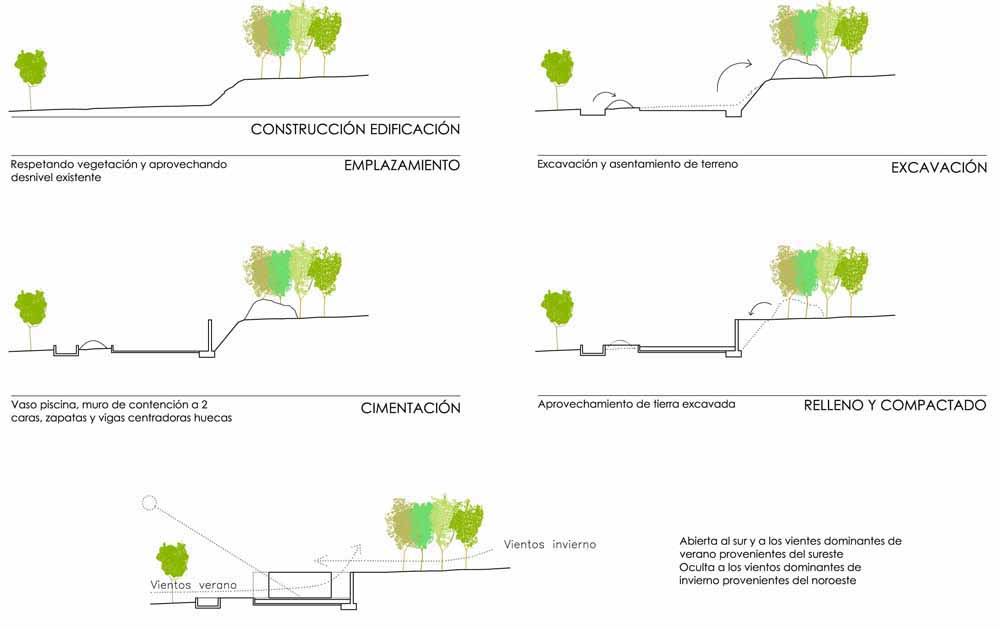 Considering that for some people, the big city life sometimes becomes stressful and unrewarding, and thanks to the labor independence posed by new technologies, some people have begun the process of "back to the village", so this project represents an intermediate step and an experiment for a family of four people where both parents are professionals, and they have two teenagers of both sexes. In the first stage, the house would be a second residence, occupied during the three summer months, more the "bank holidays" that appear the rest of the year. During the summer, visits of friends or relatives could be added to regular life. In the second stage, the use of the house would become permanent when the children reach university age and therefore they would become independents of their parents. This involves developing two strategies for acclimating the house, a quick system for the first stage, and a regular system for the second stage. A versatile house is sought . The interior spaces of the house are organized according to the best criteria for use and health, adapting them to the two stages described above in terms of its occupation, and considering the lighting and ventilation requirements of the activity that is going to be developed, as can be seen in the following schemes: 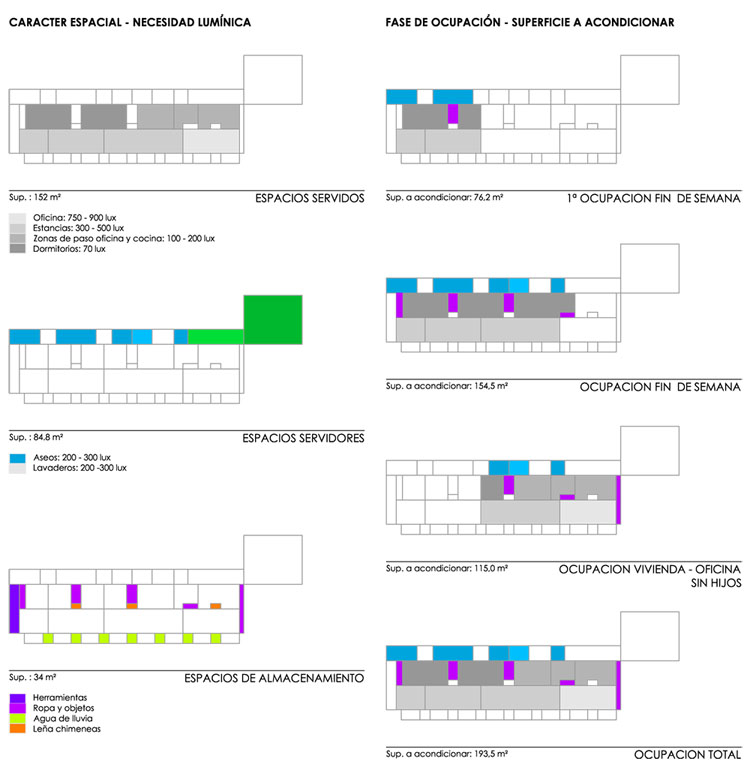 The property is resolved with a single compact volume in rectangular form, with the entire program on one floor at ground level, where you can distinguish four longitudinal bands. 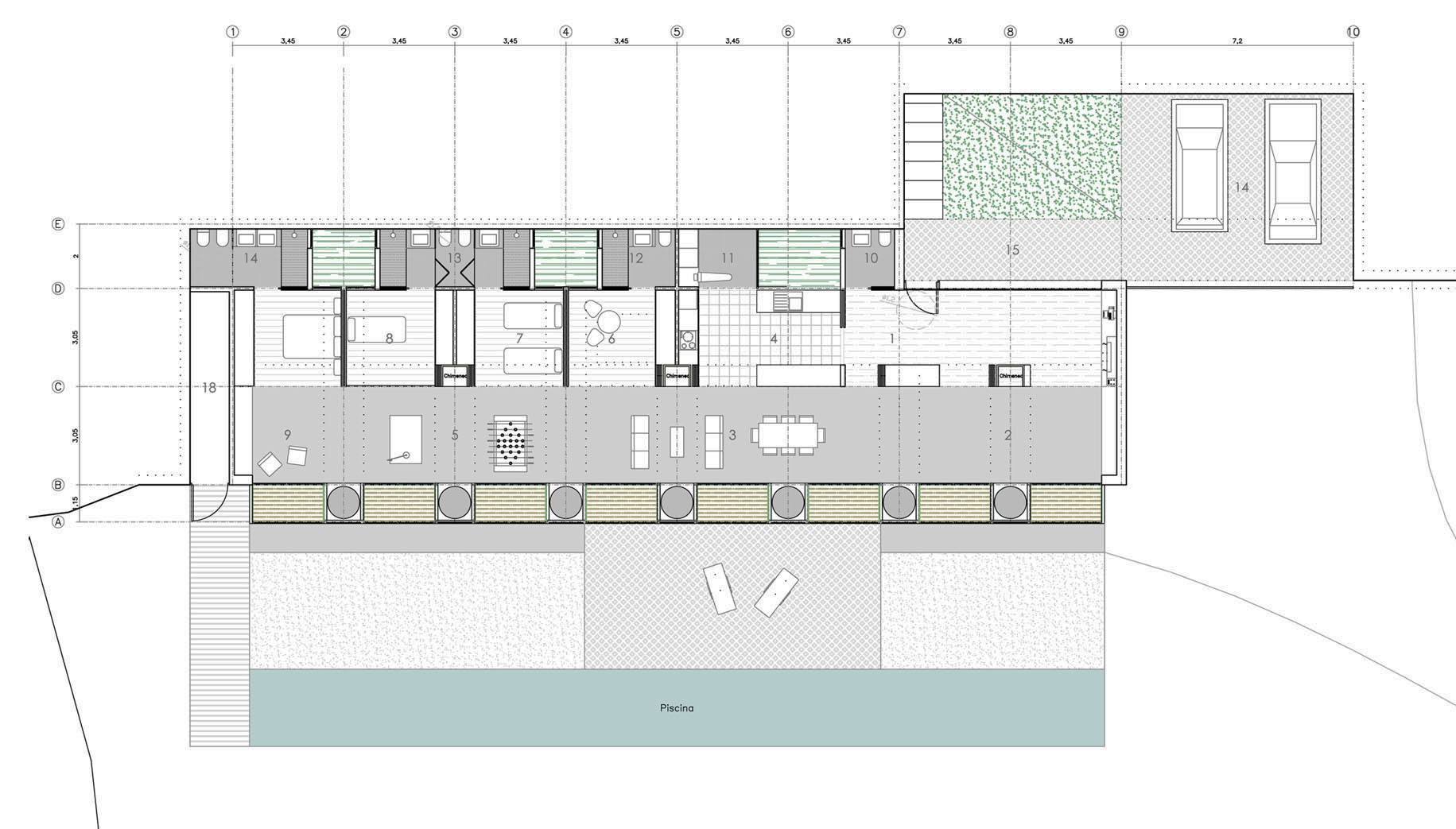 From south to north, and from the pool, we found a first band for capturing solar radiation in winter, or create shadows in summer, is the gallery-porch. This consists of a covered space that is closed in winter by glass and its roof is made of metal. This band will also have water tanks whose function is to absorb energy through the solar radiation of the day and give it back during the night into the room. In summer the gallery will be open without any crystals, and with shutters covering the metal roof to avoid solar radiation heat buildup, becoming more of a porch. The second band to be found in the building is a band whose materials are "slow heating type" and with large thermal inertia. It will have spaces for daily use, such as offices, dining room, lounge, games room and even an extension of the master bedroom. The next band corresponds to the spaces served by night or with non-intense light, either by the living areas listed above, or the last band. This longitudinal band is composed of bedroom, kitchen, foyer and reception area office. The materials that are made up are "heating fast type" materials , with low thermal mass to facilitate rapid absorption of heat and thermal adaptation as are opened. The last band of the building consists of an area of service spaces, whose character is eminently more cool, since it is composed of the bathrooms, patios, laundry room and front porch. Finally, the house has a garage for three vehicles in its northeast side, and a pool with fountains on the south side. The access to the house is from the east side, across the porch, and reaching the interior lobby where the user decides to go to the private area of the home (family residence) or to the public area of the building (office space). The openings in the housing are concentrated in the north and south facades to maximize cross ventilation. On the south side, large gaps and spaces are glazed, on the north side the holes are smaller windows to prevent heat loss. All holes have blinds and the house does not have windows on the west or east facades. 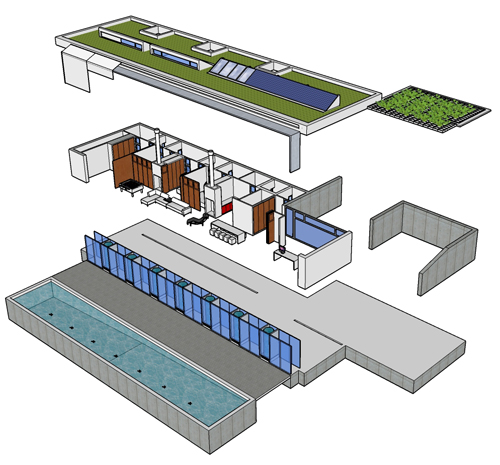 To achieve a zero energy balance, the house has general applicable strategies for the whole year, and other particular applications either winter or summer. In general, it is noteworthy that it has been opted for a pure south orientation leaving out holes in the east and west facades to avoid heat gains in summer and concentrating them in the north and south sides, smaller in north than south, to promote the Venturi effect and increase cross-ventilation. In the north and west, the house is in contact with the earth to increase its thermal inertia. There is also a sanitary space or air chamber under the house where aerothermic air flows are naturally generated helping to cool the house in summer. There are seven water tanks In the south gallery, which radiate energy into the house in winter. The roof deck is a green water tank, which collects rainwater and uses it to irrigate the green roof and at the same time it acts as scavenger for the storage tanks. The house is half-buried so it is protected from winter winds of the north, however, because of the summer wind come from the south-east, the house is open to this side allowing the air breeze pass through the swimming pool supplies, promoting evaporative cooling into the house. Solar thermal collectors are used, ensuring 100% of the consumption of hot water (DHW) throughout the year. We have also installed photovoltaic solar panels sufficient to ensure a power of 3.3 KWh in the house, becoming self-sufficient in electricity. As a specific cooling strategies for the winter period, we have chosen a gallery on the south side to provide a total annual catchment of direct radiation of 11,523 Wh/sqm space served, while uptake by delayed radiation have 13.7 m3 of water radiating at night energy accumulated during the day. The green roof also serves as natural insulation to inclement weather. Three fireplaces will be lit when needed with wood from the pruning of olive trees of the plot (89 samples), so again, what is consumed is generated. 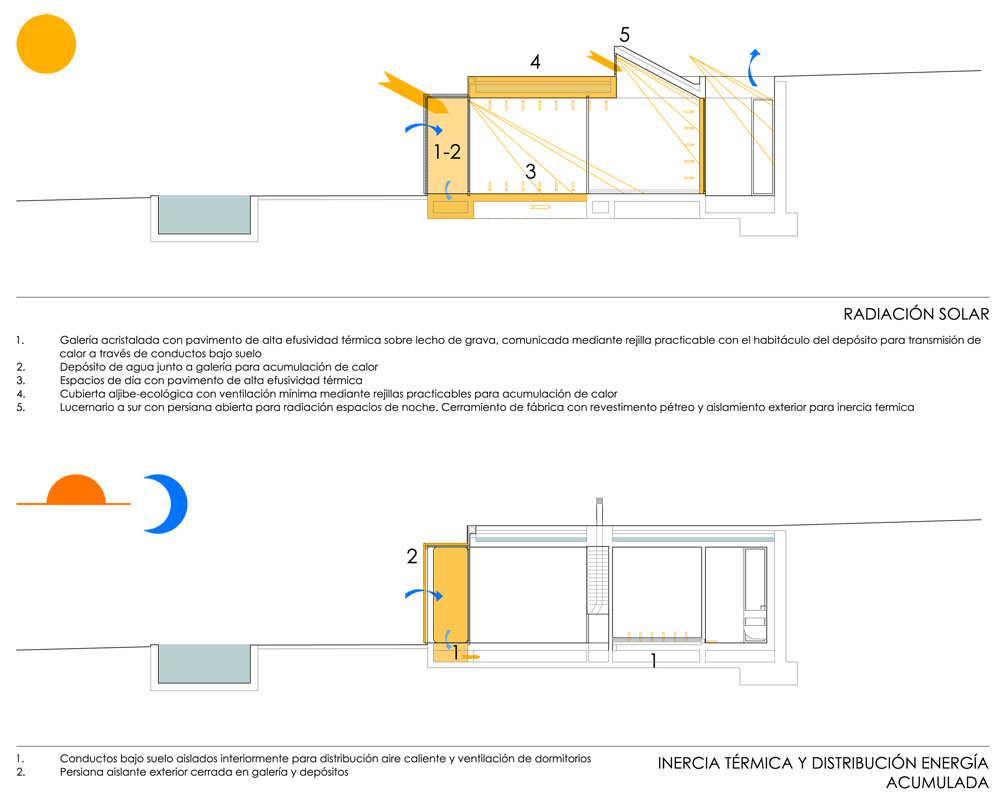 Referring to the strategies for the summer period, we can say that the area of the south facade that in winter is conceived as a gallery site, in summer becomes a porch where shadows will be applied from May to September, the warmer months. Accumulated rain water during the winter, is used as a source of evaporative cooling for the house, while the heat accumulated inside the house goes out by the openings at the top. Some screens provide access to the air cooled naturally by aerothermic flows under the ground, as well as the ventilation is ensured by cross-currents of differential uplift between the north and south facades, as dictated by the Ideal Gas Law . The prevailing winds from the southeast help humidify the air passing through the springheads of the pool and entering the water vapor inside the house. 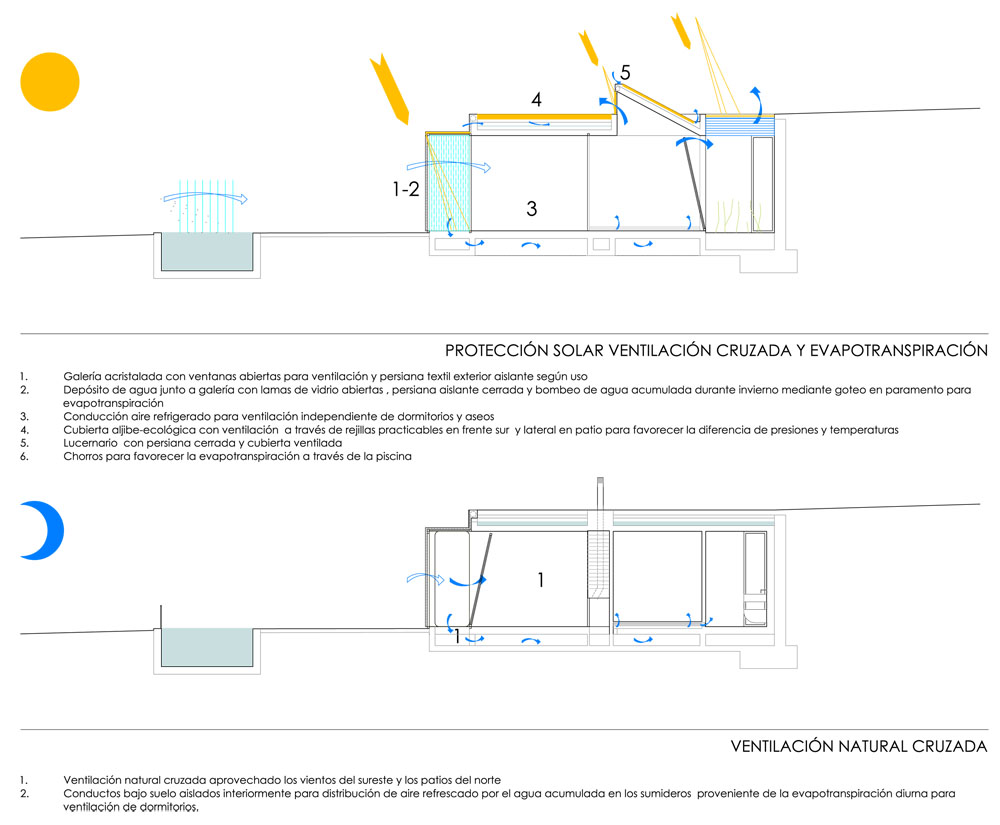 Referring to the cycle of the water, we can say that the grey water from showers will be recycled and reused for flushing toilets. The wastewater or blackwater will be reused after being treated for irrigation, and solid waste for composting and fertilizer in the field. 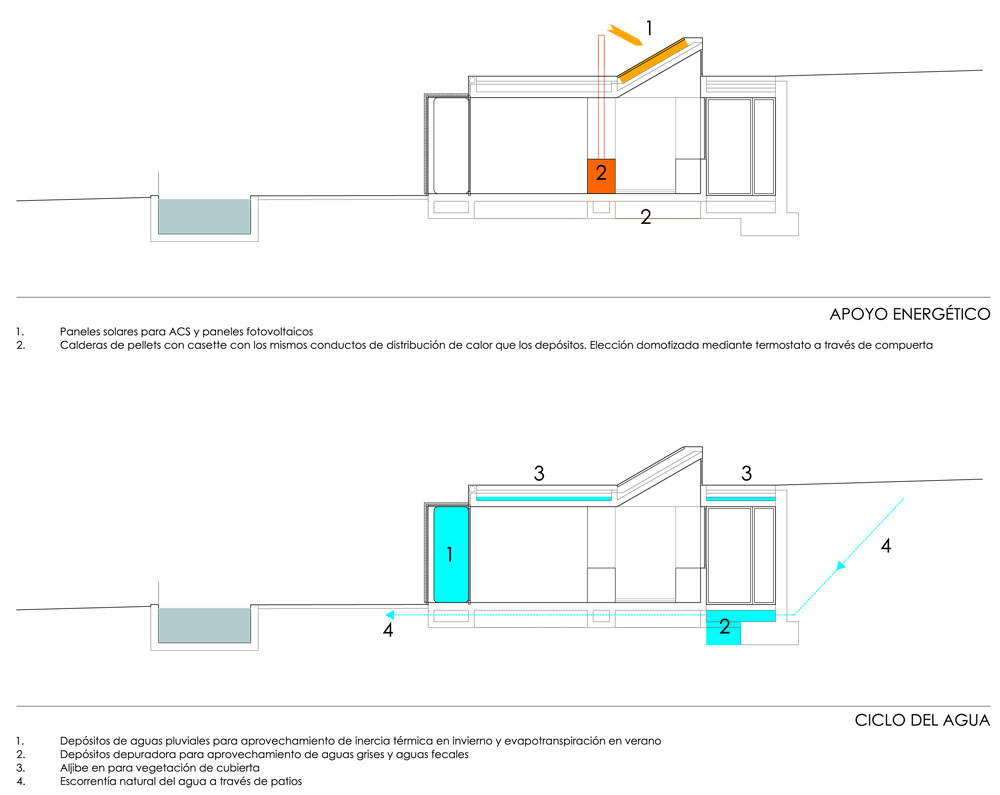 In the general cross-section of the house can observed the position of the elements of acclimatization, and the value that is given to the living space.